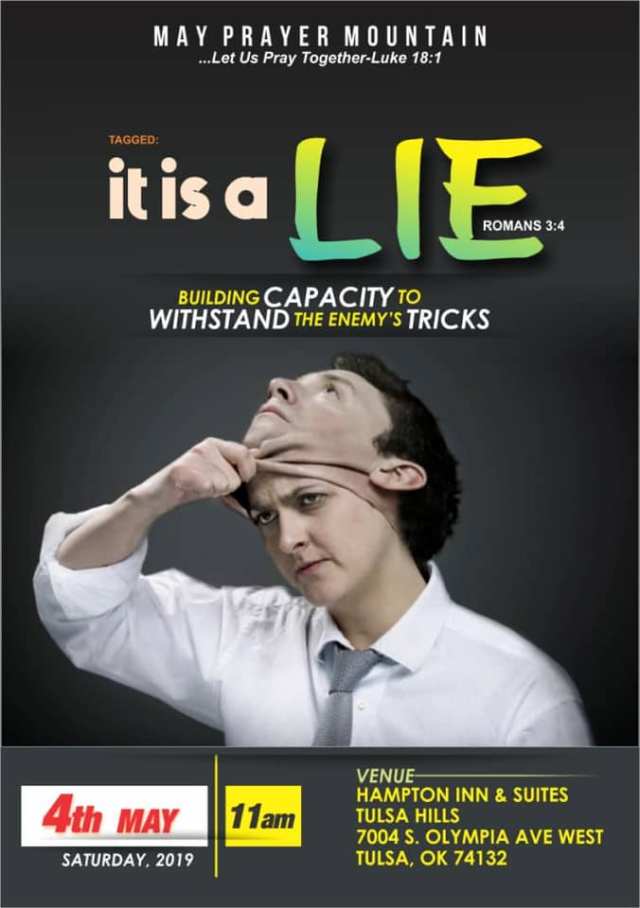 The littleness of men makes their words of no effect. Only God’s Word has the capacity and capability to deliver every of men hearts desires.

No matter what men said to you, come on Saturday May 4th, 2019 by 11AM @ Hampton Inn and Suite and hear what God has to say. Why? Men are liars, but God is the Truth.

Remember, all things are possible if only you can believe and faith comes by hearing.

Rotimi Adedokun is a teacher of the gospel of Jesus Christ. He is an inspirational speaker, writer, trainer, business consultant, life, and business coach. He has the intense zeal to teach the secret things of God, as revealed by God to him, so men and women could reign in life. His passion is to see people live up to their potentials. He detests impossibility, with his philosophies that impossibility does only exist in the dictionary of champions. As a living proves of his philosophy, he also believes in breaking old records and setting a new one. Rotimi, with his message, THE SECRET has successfully reached thousand in over 100 countries through his blog www.thesecret101home.com. Featuring in many Television Interviews and shows, both in Lagos and Akwa Ibom state in Nigeria, West Africa. He daily impacts thousands on social media platforms. His messages are always making landmarks anywhere. He was trained as a minister at Winners Chapel International but earned his Master of Divinity at Oral Roberts University. He is presently pioneering a new move at Oklahoma, where he is leading believers to pray and understanding the Word. He is happily married to Ibukun Adedokun, God blessed them with three children, and they are living in the United States.
View all posts by TheSecretMan →
This entry was posted in The Secret, Vitamin Of The Mind and tagged All Men Liars, Apostle Suleman on Truth, Bishop David Oyedepo On The Truth, Bishop David Oyedepo On Truth, David Oyedepo on the Truth, Jim Rohn On Truth, Let God Alone Be True, Pastor E Adeboye on Truth, Rom 3:4, Rotimi Adedokun on Truth, Truth About Oyedepo. Bookmark the permalink.

This site uses Akismet to reduce spam. Learn how your comment data is processed.